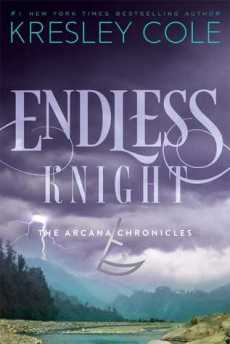 Kresley Cole takes us deeper into the dark world of the Arcana Chronicles.

Evie has fully come into her powers as the tarot Empress. And Jack was there to see it all. In the aftermath of killing Arthur, Evie realizes that there is a war brewing between the teens who’ve been given powers following the apocalypse, and it’s kill or be killed. When Evie meets Death, the gorgeous and dangerous Endless Knight, things get even more complicated. Somehow the Empress and Death share a romantic history. One that Evie can’t remember, but Death can’t forget. Evie is drawn to Death, but in love with Jack. She is determined to discover why she’s been granted these powers, and in the process, struggles to accept her place in the prophecy that will either save the world or destroy it.

On this next installment of The Arcana Chronicles, the story centers around Death, one of the Arcana that was persistent on reminding Evie, the Empress, that he will kill her. But, everything never happened because instead of killing her, he took her with him on his place together with some Arcana which includes The Devil. Evie also discovered what kind of history they had, and it was something more of what I guessed.

I liked this book, but I’m kind of disappointed with Evie. I’m looking for the crueler Empress that Evie saw before – her in the other past games – but in this book, she was trying to stop herself from being the same Empress again. Because of it, the excitement I’ve felt with the story lessened, and it was only saved by the presence of Death in the story.

I started to like Death on this book, and I couldn’t stop myself comparing him to Rhysand of ACOTAR. Right now, both of them are my top book boyfriends. For Jack, I just don’t like him that much, and I’m really hoping that Evie will stay with Death on the following books in the series.

On the romance side, Evie is in love with Jack, but being with Death, she can’t ignore the pull they have. Later on, she discovered that both of them have a history of being a lover – well, it’s more than that which made me think that it was a little bit sad to know because in this game, they would need to kill one another and only one was supposed to live.

The writing style still never failed to suck me into the world where these Arcana are currently fighting to stay alive. The actions still make me excited and jumped into different conclusions on what would happen next. Though some parts were a little slow, it was mostly the part when they were traveling, and no walls were still blocking their path.

Overall, this book gives an overview of why Death has a dark and bad image in the first book. This was enjoyable to read and I’m recommending this book to anyone who likes to see what will happen next to Evie, Jack, Death, and the other Arcana that we’ve seen from the first book in the series.

A master’s grad and former athlete, she has traveled over much of the world and draws from those experiences to create her memorable characters and settings.
Her IAD books have been translated into twenty foreign languages, garnered three RITA awards, and consistently appear on the bestseller lists, in the U.S. and abroad.

Cole lives in Florida with her family and “far too many animals.” You can learn more about Kresley at www.kresleycole.com & www.thearcanachronicles.com