Hello, my name is Andrew Joyce. I have a new book out entitled Bedtime Stories for Grown-Ups. It came about because my editor hounded me for two years to put all my short stories into one collection. Actually, it was supposed to be a two-volume set because there was so much material. I fended her off for as long as possible. I didn’t want to do the work of editing all the stories. There were a lot of them. But she finally wore me down. Instead of two volumes, I put all the stories into a single book because I wanted to get the whole thing over with. I had other books to write.

Bedtime Stories is made up of fiction and nonfiction stories and some of ’em are about my criminal youth. I must tell you, I never thought any of these stories would see the light of day. I wrote them for myself and then forgot about them. By the way, there is all sort of genres within its pages, from westerns to detective stories to love stories and just about anything else that you can imagine.

There are whole lotta stories in the book—700 pages worth. Enough to keep you reading for the foreseeable future.

Anyway, here’s one of the shorter fiction stories from the book.

For the first time in my life, I’m in love. And I think she feels the same about me. That’s good news. The bad news is that we may have to break up… sort of. Shit happens. Allow me to explain.

Her name is Jill; we met early on a Sunday morning. I was jogging along with the beach at the water’s edge one minute, and the next I was splayed out in the sand. I had tripped over a woman’s recumbent body.

After the requisite apologies, we started talking. One thing led to another and we ended up having lunch together. That was eight months ago and we’ve barely been out of each other’s sight since.

Today is another Sunday much like the one when Jill and I met, but things are a little different now.

I’m an FBI agent assigned to the Miami Field Office. I was awakened at five o’clock this morning with an urgent phone call to report it immediately. There was a terrorist threat. Hell, this was the granddaddy of all threats. At 4:00 a.m., a local television station received a call stating that there was a nuclear bomb planted within the city, and at exactly 4:00 p.m., it would be detonated unless certain demands were met. The caller said there was a package sitting in the parking lot of the North Miami office of the FBI that would authenticate the threat.

It turned out to be a small nuclear bomb, which is also known as a suitcase bomb. An attached note informed us it was exactly like the one planted in downtown Miami. It also stated that if there was an effort to evacuate the populace, the bomb would definitely go off the instant word hit the media.

Every law enforcement officer—city, state, and federal—was called in. We were given gadgets that register radiation, and all personnel was assigned grids. Each person would drive his or her grid. If the meter went off, a team would be dispatched with equipment to pinpoint the emanations. Then the eggheads would dismantle the bomb.

That was the plan.

We were ordered to tell no one of the threat, but there were many surreptitious phone calls made that morning, telling family members to drive to West Palm Beach for the day. I made my own call, telling Jill that I had planned a romantic day for the two of us and asked if she would meet me in Boca Raton. I gave her the name of the hotel where I had made a reservation before calling her and said I’d be there in the early afternoon. She readily agreed, and now I know that she is safe.

Bedtime Stories for Grown-Ups is a jumble of genres—seven hundred pages of fiction and nonfiction … some stories included against the author’s better judgment. If he had known that one day they’d be published, he might not have been as honest when describing his past. Here is a tome of true stories about the author’s criminal and misspent youth, historical accounts of the United States when She was young, and tales of imagination encompassing every conceivable variety—all presented as though the author is sitting next to you at a bar and you’re buying the drinks as long as he keeps coming up with captivating stories to hold your interest.

Comprised of 218,000 words, you’ll have plenty to read for the foreseeable future. This is a book to have on your night table, to sample a story each night before extinguishing the lights and drifting off to a restful sleep.

Mr. Joyce sincerely hopes that you will enjoy his stories because, as he has stated, “It took a lot of living to come up with the material for some of them.”

Andrew Joyce left high school at seventeen to hitchhike throughout the US, Canada, and 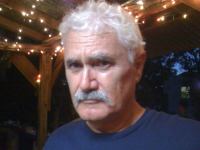 Mexico. He wouldn’t return from his journey until years later when he decided to become a writer. Joyce has written five books. His first novel, Redemption: The Further Adventures of Huck Finn and Tom Sawyer, was awarded the Editors’ Choice Award for Best Western of 2013. A subsequent novel, Yellow Hair, received the Book of the Year award from Just Reviews and Best Historical Fiction of 2016 from Colleen’s Book Reviews.

Joyce now lives aboard a boat in Fort Lauderdale, Florida, with his dog, Danny, where he is busy working on his next book, tentatively entitled, Mahoney: An American Story.