Ia Cōcha never thought she’d be working for the Olympus Commonwealth. But that was

before she found out her trusted brother Einn was trying to tear apart the universe. Now, Ia, the Blood Wolf of the Skies, has agreed to help the Royal Star Force on one condition: when she finds him, she gets to kill Einn herself.

Brinn Tarver has just come to terms with her Tawny identity when the public lashes out against her people, crushing her family. At her breaking point, she starts to question everything she believes in—including Ia.

After the death of his mentor, Knives Adams is doing his best to live up to a role he didn’t ask for as Aphelion’s new headmaster. Still, with each new step deeper into war, he feels torn between his duties and the pull of Ia’s radical—sometimes criminal—ideas.

As they fight to keep darkness from eclipsing the skies, their unpredictable choices launch this breathtaking sequel to explosive new heights.

Eclipse the Skies is an enthralling and action-packed series ender.

Eclipse the Skies started where it left off in the first book, Ignite the Stars. Here, we get to follow what happened after IA discovered what her brother did, and what the other characters are up to. Also, we still have the three POVs from IA, Brinn, and Knives. Having their own POV really helped because I was able to get to know the reasoning behind every decision they made and chose. The plot is great, and the story consists of both slow and fast-paced narration. I liked the flow more when I reached halfway to the end.

The story also touches some topics like protests of the refugees, discrimination against the refugees, war, sibling relationship, friendship, family, LGBTQ characters (the two queens and Eve), power/authority, violence, and death. It also has characters which you will like and hate. And, of all the characters, I’m also interested in some of the minor characters like Goner and Kami. I kind of remembered Klaus in Goner in some ways and I find him irritatingly funny.

IA Cōcha. In this book, I witnessed the weaker side of her – how she lost hope and have it back again. And how she grows as a person is amazingly good to see. Her journey since the start is not easy, but she was still able to break down the walls that tried to stop her. And I find her inspiring for not giving up, and continuing to fight, no matter how scary what’s in front of her.

Brinn Tarver. I hate her. She became irrational, and I hate how she reasoned out to herself why she was doing this and that. But, I somehow understand her because what she had been through was hard, especially when it has something to do with her family.

Knives Adams. I see him developed too as a character. He became stronger and courageous to face whatever they encounter. He still tries something, even if it seems impossible, hopeless, or difficult.

Overall, I’m giving this five cups for being one of my favorite YA sci-fi and for letting me get introduced to the characters and their life in the future. I’m recommending this to everyone who wants to read a book set in space, and to those who would like some action-packed and exciting story.

Maura Milan currently resides in Los Angeles, where she can be found hanging out in

cafes and drinking matcha lattes. In her free time, Maura enjoys watching Korean dramas and hanging out with her schipperke, Thor, who she believes should become a professional comedian.

To this day, Gilbert Blythe is her ultimate boy crush. 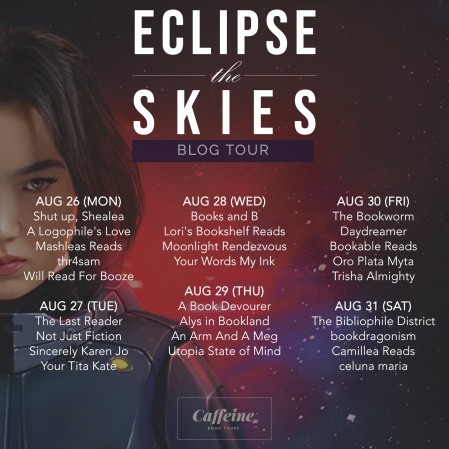